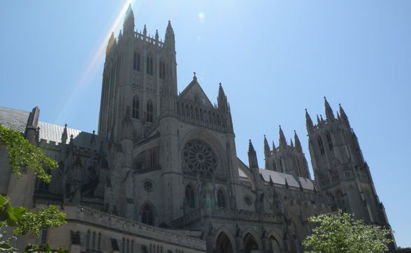 Crowning the top of Embassy Row and nestled by the National Cathedral is Saint Sophia Greek Orthodox Cathedral, which, if it were anywhere else, might itself be the big attraction.

But, alas, it’s not, and soon you’re on the grounds of the National Cathedral, the sixth largest cathedral in the world.

Completed September 29, 1990 after the cornerstone was first set  on September 29, 1907, it fulfilled not only Pierre L’Enfant’s original plans, but the spirit of Benjamin Franklin’s words as well,

And it being found inconvenient to assemble in the open air, subject to its inclemencies, the building of a house to meet in was no sooner propos’d, and persons appointed to receive contributions, but sufficient sums were soon receiv’d to procure the ground and erect the building, which was one hundred feet long and seventy broad, about the size of Westminster Hall; and the work was carried on with such spirit as to be finished in a much shorter time than could have been expected. Both house and ground were vested in trustees, expressly for the use of any preacher of any religious persuasion who might desire to say something to the people at Philadelphia; the design in building not being to accommodate any particular sect, but the inhabitants in general; so that even if the Mufti of Constantinople were to send a missionary to preach Mohammedanism to us, he would find a pulpit at his service.

The lighting was horrible inside for camera work, so do cut me some slack.

She was Italian, and growing up Protestant, this sort of thing just ain’t natural to me. It made for a pretty picture though! (lighting notwithstanding.)

At first I wish people hadn’t been there, but then again, it really helps with getting an idea of proportion.

One of the many really cool stained glass window motifs. But, the only one I got a decent shot of.

The Canterbury Pulpit. Dr. Martin Luther King, Jr. delivered the last Sunday sermon of his life from this. Since, it (or its smaller neighbor to the left) has also been used by the 14th Dalai Lama Tenzin Gyatso, Archbishop Desmond Tutu, Iranian President Mohammad Khatami, and many others.

It is, by the way, officially Episcopalian.

A service area in the crypt. Many congregations have used this space temporarily, even a Jewish one.

A scene depicting Jesus’ burial, also in the crypt.

Yay, flying buttresses! I wrote a limerick in 9th grade about flying buttresses. All I remember is that it ended with a woman getting her dress stained maroon. This would have fit my scene perfectly (minus the rhyming ‘full moon’). My more pretentious poetry I later became embarrassed by, but I wish I could find that one again. Oh well, I digress. Also, some engraved lettering I can’t make the words out of. And, did you know there’s also a Darth Vader grotesque?

There were several of these column capitals. They tried to represent all the different American Indian groups.

Up in the Pilgrim Observatory Gallery.

You can see the faintly Capitol, Washington Monument and Jefferson Memorial in the background.

Now you see one tower.

Now you see the other.

Where were those stairs to back down again? (Kidding, there’s totally an elevator.)

Sucks so much I missed this by a couple days.

But first, a piece of interest. This was upstairs in the little museum there. It’s from a synagogue formerly at Kaifeng in China, and took me back to the book Religions of the Silk Road, by Richard C. Foltz. It’s actually not quite as improbable as you might think, but still a remarkable artifact.

Walking back towards Georgetown was also this neat Reform synagogue, Temple Micah.

While we’re on the topic of houses of worship, near the White House is St. John’s Episcopal Church, the “Church of the Presidents”.

But before I finish this installment it’s back momentarily to the crypt of the National Cathedral for a message suitable to the Holiday spirit (and year round).

Thanks again for joining me in another photographic journey!

Is that a home movie camera-holding gargoyle there at the very end, Khirad?

Wonderful, wonderful pix as always. Like you, I’m mystified by the “GITMO” engraving on the wall. {?} And the young woman kneeling at the altar rail…I had to smile at the irony of many visitors being surprise at seeing a person actually praying at a cathedral. Aren’t they constructed for tourism? 😉

Thanks so much again!

Thanks for the great pictures and the link to Religions of the Silk Road. I think the Silk Road must have been the most phenomenally exciting route to take at the time. Probably still interesting.

Khirad– fabulous pix! I’ve been to both the National Cathedral and Notre Dame, but until now, I never noticed the similarities!

Apparently this similarity had something to do with Right Rev. Henry Yates Satterlee’s wishes for Gothic authenticity. He was the Episcopal bishop who started the project.

They really cleaned Our Lady up nice.

I fainted as an eleven year old in Notre Dame de Paris, landing on its floor somewhere in the nave. My father picked me up, rushed me to a nearby cafe and poured Cognac down my throat. I saw the light.

I love nearby Chartres for its grandeur and asymmetry

And Sainte Chapelle in Paris for its glorious interior. It is a sleeper of cathedrals.