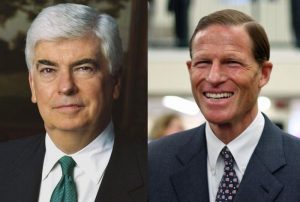 Senator Chris Dodd (D-CT) announced that he will retire after serving five terms in the United States Senate. Within hours of this announcement Connecticut state Attorney General Richard Blumenthal said he would run in the hopes of winning the seat being vacated by Senator Dodd. Polls indicate that the GOP has little chance of turning the Nutmeg State red despite Dodd’s current unpopularity with Connecticut voters.

Senator Dodd has been the victim of harsh criticism from the right. This is due in large part to the economic crisis for which he has become one of right’s scape goats. Some of this criticism has been deserved, but many of the comments about Dodd are outrageous, and his role in our current financial mess has been greatly exaggerated. Whether deserved or undeserved, these accusations have had a devastating effect upon his popularity with Connecticut voters. Needless to say Republicans are gleeful about Dodd’s retirement, but aside from showing once again they are able to play games of character assassination they have little reason to celebrate.

Recent polling has shown that Blumenthal would win by a comfortable margin. Even Rasmussen shows that the presumed GOP nominee Rob Simmons would lose to Blumenthal 56% to 33%. Senator Joe Lieberman has indicated he’s open to running as a Republican in a bid for reelection in 2012, but Lieberman’s approval numbers continue to fall. As Eli Blake put it, “Lieberman [is] even more unpopular than Dodd,”and according to a Public Policy Polling memo:

“Joe Lieberman isn’t popular enough with the Democrats or the Republicans to receive their nomination for the Senate in 2012,” said PPP president Dean Debnam, in the polling memo. “And since the independents don’t like him much these days either it’s hard to see how he’ll be around for another term.”

What’s more, Lieberman has been beating the war drum about Yemen, which furthers his image of being overly hawkish on Middle Eastern foreign policy. His comments have been looked upon with considerable disdain, and have also been shown to be dangerously erroneous. Thus, as I’ve indicated before, Lieberman will lose badly should he seek reelection.

The GOP might be happy to see Dodd go, but they are in for more headaches than they bargained for if they think 2010 spells the Democrat’s doom.

The thing about Dodd retiring is that he can really go after reform now without endangering his seat in the Senate. I hope he wages a tough fight for health care during this ping pong process. And we’ll see where his loyalties lie when we get started on finance reform.

Nothin’ like a man with nothin’ left to lose.

It took the rightie trolls a long, long time to figure out we were actually happy about this.

Scher, this is a very encouraging article. There’s so much fear-mongering out there that it’s a relief to hear an assessment that shows voters have little inclination to go back to the bad old days…at least not in CT!