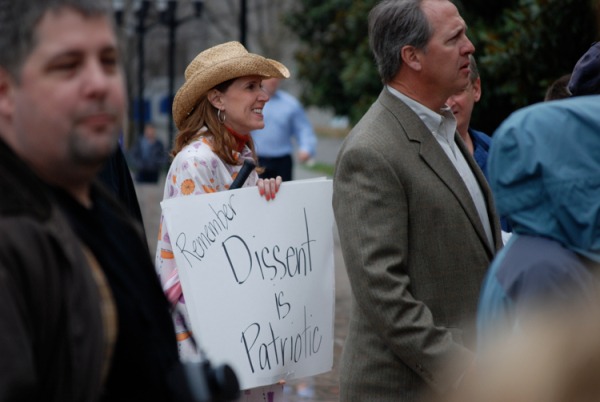 The end-all-regulation, my-health-insurance-company-is-just-fine-thanks crowd in the Tea Party movement have found an unlikely target for their next national effort: Corporate America.

The Tea Party Patriots group is planning a “National Day of Strike” for Jan. 20, one year to the day after President Obama’s inauguration. The goal of the strike, according to the websitewhere it’s being planned, is to “financially cripple” the companies across America the group says are “backing the leftist agenda” and “funding socialism.”

How can you tell which companies are funding socialism? The answer, according to organizers: they advertise on CNN and/or MSNBC, and they donate money to Democratic candidates.

Former Christian Coalition state legislative director and conservative political strategist Allen Hardage is organizing the effort. In his messagecalling on tea partiers to join the strike, he says he knows from experience that some corporations are sending a message to the left with their advertising dollars.

“Having spent the last 21 years working in advertising I can tell you that before someone take out an advertising plan on CNN, MSNBC etc, they know where they stand,” he writes. “Contrary to popular belief it’s not just about money, if it were MSNBC would have no advertisers.”

On Jan. 20, Hardage is calling on tea partiers to “expose” the socialist-supporting companies, and bombard them with phone calls, emails and protests to demand they stop advertising with “liberal” media outlets and contributing to Democratic campaigns. If they, don’t, the tea partiers will promise to boycott the firms into financial ruin.

It’s not clear how organized the strike movement is at this point. (An email to Hardage was not returned Dec. 24.) The plan was first announced Dec. 20, and on the strike website organizers say they have several thousand followers on various social networks. But the site says Hardage is still searching for regional directors and staff to orchestrate the scheme across the country.

Some conservatives are warning the tea partiers against the strike. On his blog, conservative law professor William Jacobson argues the plan is doomed to failure, based not least on the fact that conservatives could be alienating a potential ally when they take on the machinery of capitalism:

I completely sympathize with the emotion behind the idea. But the idea is a really bad idea for at least two reasons.First, conservatives are not about boycotting commerce. We are about generating commerce and free enterprise. We also are about working hard, so taking the day off as a means of protest runs against our grain.

And just who is it that we would hurt? The small business people who are a critical part of our movement. A boycott of innocent businesses sends the wrong message, even if for only one day.

Jacobson says the second reason not to strike is found among the progressive groups who’ve tried boycotts in the past. He ticks off a list of boycotts against Glenn Beck advertisers, “Mormons and the state of Utah” and writes, “Not one of the boycotts worked, and these failures left the boycotters looking foolish and less powerful.”

What a bunch of granfalloons!

Have not read that, but Merry Christmas to you, too!

Actually, I would not be surprised to see this as part of The Family’s desire to target anything on the left. They use that term for anyone who they perceive as working against their agenda. It would not surprise me in the least.

Well, I’ve heard it all. I thought the Teabaggers were nuts – dangerous nuts, but nuts all the same. Now they’re becoming like scorpions stinging themselves. First of all, both parties are deep in the pockets of corporations, so they can’t really complain about the Democrats’ corporate masters without mentioning their own. Secondly, boycotting business is a bit of an oxymoron for these people, because isn’t the Republican party the part of …. big business?

Shhhh.
You’re not supposed to tell the teabaggers that.

Like Scher said, the irony of this is hilarious!
It’s a Christmas gift to us all!!!

It will be interesting to see who they name as targets.

Would seem more potent to boycott companies that shipped jobs overseas and ripped off the taxpayers in the process. Since everytime a company closes, they take an accelerated write down and get CASH back from the government, you’d think someone would object to that, now wouldn’t you?

Makes me think that more of the tea bag folks are not the mainstream, out of work blue collar folks they pretend to be. I suspect a lot are pretty well off and want to stay that way. This nation has no “socialist” agenda – but it has a long history of rip offs of ordinary people by large corporations. Why is that not a source of outrage to the majority?

This guy Allen Hardage is the same one who Don Lemon of CNN got testy with when he made the claim, “real americans” referring to the town halls against healthcare. Don Lemon made the statement, we are all real Americans, this guy is another loony

I think I saw that. I like Don Lemon. I also remember the thing when the black boy wasn’t allowed in a swimming pool. Lemon was perhaps too fair, but at the end geve a good wink and passing statement. I know “straight journalism” isn’t suppose to editorialize, but sometimes they bend over too much, don’t correct lies, and there’s nothing wrong with calling out bullshit.

We don’t have cable or satellite TV, so I have no idea which corporations advertise on MSNBC or CNN, but from what I do see on regular NBC, CBS, ABC and Fox, plus their affiliates, is that all of them seem to share the same corporate sponsors.
And from what I recall, corporations give to both parties.

I’m not against the teabaggers targeting corporate America, but I disagree with their reasons.
It’s too bad that the teabaggers are such an ignorant, racist bunch, because if they were more tolerant and educated, I’d join them in boycotting corporations, and do not think that I’d be alone.

And of course, the Republicans will not tell their teabaggers the truth about the corporations because they’d be implicating themselves for being bought and paid for by corporate America.

Oh, the dilemma of being a Republican.

Haha! Yes there’s endless irony in this one! 🙂 I can’t even begin to imagine FNC trying to walk it back with the tea baggers, but I don’t see how they can back them on this one since it will totally be counterproductive. What’s more, the tea party movement is primarily the brainchild of FNC. So, there’s more irony for ya! 😉 It’s hilarious to me.

as in balls? Sorry, couldn’t resist.

I find it wild that the tea bagging sorts would actually be talking about going on strike. There’s so much irony in this story I don’t know where to start!

I know, the very concept of a strike itself…