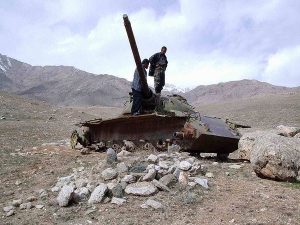 Disclaimer: This post will SURELY inflame many people.  Please keep a level head and post counterpoints which we, MOSTLY myself can learn from.

Last night, I watched Dan Rather give another report on the ground in Afghanistan.   Arguably, Dan knows more than any other reporter about the history of our involvement in this country (11 tours?).

Incidentally, I believe you have to buy the shows on iTunes or here: http://www.hd.net/danrather.html.  There may be YouTube copies, I don’t know.

Back to the subject.  I USED to believe there was a way to create a barrier on the border of Afghanistan and Pakistan that could ultimately be maintained by centralized Afghani military forces.  And, I believed that infrastructure could be setup relatively quickly (in 2-4 years).  I no longer believe that.  First, a few of my subjective observations:

* Dan himself AND the military pointed out that the Elders (the multitude of clan leaders in each village and city) were the most powerful force in Afghanistan.  The most capable force for ejecting Al Quaeda militants, governing the area, and stabilizing the region.

* The NEW idea from Obama is to withdraw from the outlying areas where the militias have strong holds and focus all resources on certain cities which will  ultimately become strongholds for the centralized Afghan military and police forces (APF and AMF??)

* The new forces will ultimately lead to the necessary campaigns to maintain the critical internal trade routes and border security.  From that point, the Al Quaeda will not have a new home to go to.  THEORETICALLY, we could them work with the Pakistani’s to destroy the Al Quaeda influence (yet another military engagement).

The new centralized military forces WILL take away power from the Elders and will engender paranoia that another dictatorship or fascist organization will attempt to disrupt their power structure.  This will result in the same scenarios we saw with the British, and USSR.  Un-winable guerrilla warfare in some of the most brutal landscapes in Eastern Asia.

EVEN IF we succeed…there’s still Pakistan.  Why is Al Quaeda thriving there?  Do we have to offer 100,000 troops to Pakistan to help them as well?  What happens after that?

IMO: The REAL reason for our engagement in Iraq (first) and Afghanistan now is the newly built oil supply line from Iraq running through Afghanistan.  Protection of the oil is and has always been the primary objective for “stabilizing” the region.

Wouldn’t it be better to withdraw ALL troops from Iraq and Afghanistan and focus the trillions of dollars that will ultimately cost us on:

The short term gain would be a whole LOAD of troops to guard our northern and southern borders which we are in dire need of doing anyway.

So, tell me…how far off base am I on this?

Neo-cons, neo-libs, what is the difference? why, how can one dictate how their country will be ruled and governed without militaristic suppression? Did not the Romans learn(and forget) that little point? Without complete colonization both Afghanistan,Iraq, and as seen in Pakistan revert to the ways and wants of they way they choose to govern themselves? What is so wrong in Afghanistan if the choose their tribal councils and their “Loya Jurga” (sp)? They have used that system longer than the U.S. has been here.
The border area was drawn by the west dividing tribes and was completely artificial.
I appreciate your post Franken, but there are so many complexites to this question. It does make one (me) to try to put it into words.
So I will say good job and I will be back with schools, Takfiris,and the role of the clerics/mullahs.

In the end no one knows the people of Afghanistan better than they know themselves When all the forces are pulled out of their country, they will still decide what is best for their lives.

If Pakistan with it’s nukes doesn’t make a greater effort to quell the infiltration of the Taliban and the remnants of Al Qaida, then all the force in the world won’t stop them from hiding out on the border villages with Afghanistan. The divide between the central government and the remote tribal villages is too great unless the government makes a concerted effort to include them and a that point we can help them to rebuild their devastated country. It is still their country.

Actually, the primary pipeline in Iraq runs from Kirkuk to Bayji; both cities are located within the country.
Here’s a link on it and how often it gets sabotaged:
http://www.iags.org/iraqpipelinewatch.htm

The proposed piplelines through Afghanistan are natural gas. TAPI originates in Turkmenistan and the IPI starts in Iran It’s a geopolitical puzzle to behold. BTW, I listened to Dan Rather last week on the issues and respect his take on the conflict.

I guess it depends on whether you believe Al Qaeda is a real threat or not. There are arguments to be made on both sides of that question. I happen to believe they are. That said, I wish we had taken a different approach after 911. I wish we had rallied all the support we had in the world rather than alienated everyone. I wish we had used intelligence rather than the military to respond.

But we didn’t do that. Under the incompetent, xenophobic, and panic-stricken leadership of the Bush administration, we made things worse in the area. Why did we let bin Laden go at Tora Bora? Why didn’t we complete the job and leave? Why is Pakistan so much more unstable?

So now we have a mess on our hands. A mess that we made. I’m not happy about being in Afghanistan, but I’m worried about Pakistan. So I’m waiting to see what happens in the next three months. Then I’ll reevaluate what I think.

What Obama is up against

It was posted back in November, but it’s very timely.

Hey, Nellie, How do you make those links? I work on a wiki and know the wiki code for it but not html. Are you using html? What’s the code? (I want to do it too!!)