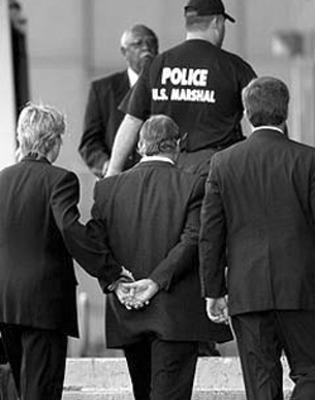 Apologies to my new POV friends if this is a little thin to be a post.   I don’t have the time to research this further right away but wow, I am hopping mad having just learned that Senator Bayh’s wife is on the board of Wellpoint and had earned over $2 million dollars over the past two years.

According to Wellpoint, prior to nomination to the board, Susan B. Bayh, J.D. Chairman of Corporate Governance & Nominating Committee and Member of Compensation Committee, Emmis Communications Corp. served as a Distinguished Visiting Professor at the College of Business at Butler University, Indianapolis, Indiana from 1994 to 2004.   From 1989 to 1994, Ms. Bayh served as an Attorney in the Pharmaceutical Division of Eli Lilly and Company, where she handled federal regulatory issues for marketing and medical affairs.   This outrageous situation needs to be widely disseminated so others can contact their Representatives and demand an ethics review.  According to the standing rules of the Senate on Conflict of Interest:  http://rules.senate.gov/public/index.cfm?FuseAction=RulesOfSenate.View&Rule_id=259a2601-22d6-4a04-a431-45b8501d5518 this is, if not a violation of several rules, it is so contrary to the intent of the rules, it points out that the rules need immediate review.  Senators should at the very least have to recuse themselves from voting on matters where there is a clear monetary conflict.

You are right it is hideous. In most other liberal democracies this would be a conflict of interest but in our corporate democracy it’ just good business.

Well Campaign Finance Reform is the real answer, but we need triage here. Most will agree the way companies use money to influence congressional votes is corrupt but there needs to be a way to stop legislators that have an obvious conflict on a particular vote so yeah, why not do it like judges. Crazy?

That is outrageous! How can an elected official, whose spouse or immediate family member is working for an entity which is specifically a target of legislation, be permitted to affect the outcome of that legislation?

This isn’t covered by ethic laws?