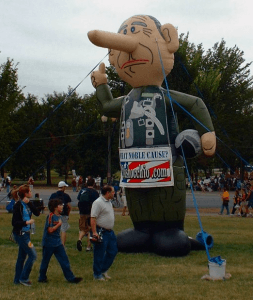 Okay, one of the bullshit arguments that Republicans trot out on Health Care should be blown up for once and for all.

I was watching Bill Maher Friday night and a dweeby Republican Woman, feigning a sense of humor (which Republicans often do since they don’t understand how to intentionally be funny (see: Dennis Miller). As the conversation turned to Health Care, she robotically blamed Dems and spouted something to the effect of, “If they would only let us shop for insurance anywhere in the country we could have more competition and prices would go down…but the Democrats don’t want that.”

Let’s run that through the Pinocchiometer…hmm, what she is really saying is, “Let’s take away state’s regulation of insurance, deregulate health insurance like we did with banks, how could that not be good for Americans?”

What is their mental malfunction (quote from Full Mental Jackass)?!

The intellectually bankrupt party should be widely exposed and humiliated for this talking point deception, put in the public stocks and whipped with the phrase “deregulation” mercilessly.

The only drawback is that i think they might get “excited” by public humiliation and whippings.

Free market principles simply don’t work in business sectors where economies of scale rule like in the health insurance industry. In such market places they need to be treated like utilities which are highly regulated and because it’s healthcare there should be a non-profit public plan administered by the government or NGO and if private insurance wants to stay in the game it should be allowed a minimal profit.

Face it few mature large business sectors ever have free market competition because the forces to consolidate are so strong competition is severly limited.

I saw Bill Maher and the most absurd part was that she pointed to businesspeople like Bill Gates which was ironic because Microsoft has done every thing he can to stifle competition.

What she is actually saying is that the insurance companies want the opportunity to further confuse the customers with false competitive distinctions.

The fact is that the ‘health insurance companies’ are in the business of designing more and more obscure health plans that make it impossible to find the best value, of which there really is not any anyway.

In almost every market in America there are really only two companies “competing”, and they make certain to collude on pricing, be assured.

Let private companies offer supplemental insurance if they can build the business model.