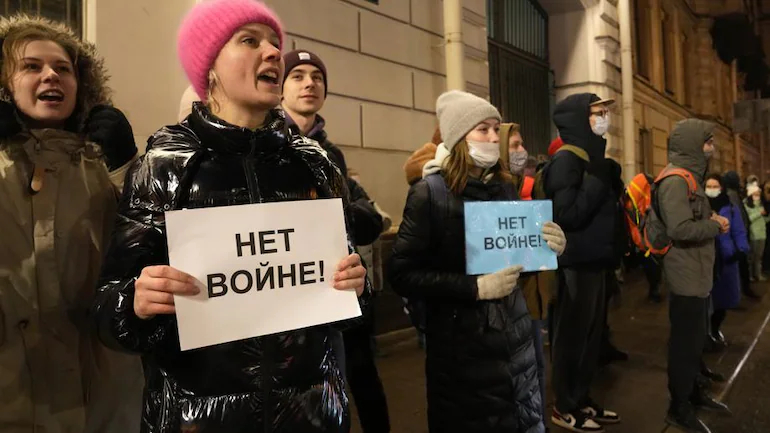 The Ukrainian people are suffering through such a horrendous and destructive war but they have stood up together and against one of the world’s biggest militaries with such bravery and character. They may fight the Russian invaders but they won’t be able to remove Putin from power. Only the Russian people could do that. The totalitarian state in Russia may drown Russians in lying propaganda, outlaw opposition to Putin and this unjustified war and many, especially the older, poorer and less educated will be unaware of how they have been brainwashed to support this madness.

But there are many brave Russians risking arrest, imprisonment and the destruction of their careers and lives who are standing up to Putin and his pursuit of genocide and fascist dominance. This weekend’s music thread goes out to the brave people of Ukraine defending their nation and the brave people in Russia protesting to stop this ongoing massacre of innocent people. Share songs about cities and countries around the world, as most of the world comes together to support Ukraine and cheer on Russian citizens rallying opposition to Putin and his criminal war.

And as tribute… don’t think Pink Floyd had no influence on us goth folks.

A Drug Against War
https://www.youtube.com/watch?v=JfARWU-rchk

Because a long time ago I read about them talking about Chiapas and Zapatistas
https://www.youtube.com/watch?v=sNFUANJ_Q3M

[okay, I was lost down my Industrial rabbit hole and forgot I took German in High School]

Sytem of a Down [Armenian-American]

And as to the Celtic…

Morrissey [who has been questionable – but that’s another topic – unlike Laibach I don’t how ironic he’s being recently]
https://www.youtube.com/watch?v=KKoS5X4SMrY

And I’ll add some others [U2 and Sex Pistols and Clash you can add, I’m trying to just introduce others]

VNV Nation – Legion – the live version with images of MLK, Sitting Bull, Gandhi and others [again, I love Industrial music because of how political it is].

I have mentioned many times that Rammstein – all the band members from the mid-nineties to this day are still informed by growing up in East Germany. Learning Russian along with German, and performing in sport and the rest. They have such an interesting intersection and nuanced view of growing up in the Eastern Bloc.

And back to Rammstein – we’re all living in America
https://www.youtube.com/watch?v=Rr8ljRgcJNM

My favorite Slovenian Industrial avante-garde band to which I have a passport for NSK, and whom were around to piss off Tito and everyone else. Irony is dead. Slavoj Žižek, the Slovene philosopher is a fan. Dripping sarcasm. You might recognize them from actually performing in North Korea.

NATO – The Final Countdown [they do the funniest covers]
https://www.youtube.com/watch?v=68EprbfXH-g

You’ve listened to me, so, those are the Kinks? Like Ray Davies? Like, my parents saw them live. I’m gonna process that, as I grew up with a more Grunge version.

Paul McCartney with an Irish – okay. Did not know. I refuse the Sir part on his behalf.

I did see the Ukraine opening on SNL. Again, SNL still has its moments.

Ray Davies and The Kinks were known for their sarcasm and humor, not a lot of bands had that. In addition to being pro-Irish, just read a story that The Beatles’ song, “Blackbird” that McCartney wrote, was based on a visit to the US where he saw racists assailing black women, something he said he had never seen himself in the UK (which had a much smaller black population back then instead of now).

SNL did indeed hit the bullseye with that opening last month.

The song “Russians” was well-intended even if not completely accurate, as you say, the USSR was complicated. It’s not a great song but like a lot of simplistic but earnest songs in that era (“We Are the World”, “Ebony and Ivory”), it did express humanity which was respected by a wide audience back then. Today, I don’t know that the sensibilities are quite like that but seeing people respond to a poll by over 70% that they are willing to pay more for gas to help Ukraine and stop Russia is affirming.

This was always my favorite Beatles song. Even before I knew what Communism was or Reagan.

And you know it was a parody of The Beach Boys?

I always thought this was a parody?