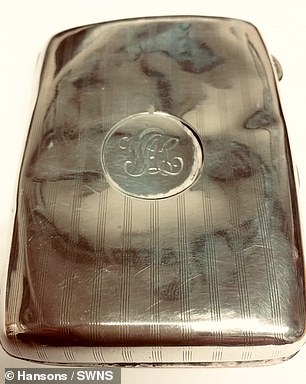 I was looking recently at some of my late Dad’s memorabilia when I was reminded of an event that shook our family to the core.

I’ve mentioned before that Dad was an avid punter and went to all Irish racecourses, as well as Aintree in England for the Grand National. On this occasion, in the late ’60s, Dad was in Navan, Co. Meath for the races there.

Late that night, our doorbell rang. I opened the door to see Dad, swaying badly, with scrapes, blood, and dirt on him. I got him into the living room where he subsided into his chair and said:

‘Pour me a Paddy(whisky) and some water. ‘

Naturally, I hurried to comply. He took a large swig and seemed to settle down some, but his hands were trembling.

I said: “I didn’t hear the car drive up. What happened?”

He took a while to respond, but pulled out his cigarette case and lit up. He pointed to the case and said ” This thing saved my life tonight”

Of course, I asked how and he told me that he had left Navan after the last race and was headed for home in the twilight. The Irish roads then weren’t well lit outside the cities, So he was driving carefully. Then he rounded a blind corner to find himself running under the rear of an illegally parked, unlit black truck. The front of the car crumpled back to the windscreen and showered him with glass. No 3-point seatbelts or airbags in that car either, just a lap belt, so he was jetted forward onto the steering column and severely thrown around.

Cars coming behind quickly stopped and got him out, cut up some, legs badly bruised, ankle wrenched, and clothes a mess. The police got him to Navan Hospital, where they patched him up and a racing pal drove him home.

“The car is totally wrecked, and I wouldn’t ever drive it again anyway, but thank God I’m not leaving your Mother a Widow! Yet.”

60 years later, I’m looking into my hands where that solid silver cigarette case now nestles, with the imprint of the car’s steering boss still there, instead of through my Dad’s chest.

Mom and us boys (and the theatrical World) enjoyed 20 more years of Dad because of it.

First, wonderful story and so happy your dad was saved by the cigarette case. But, I wonder if he had taken up medieval re-enactments as a hobby instead of smoking, he could have been fully protected by a suit of armor.

Okay, I know that’s quite a nonsensical non-sequitur but it’s the Monday after Thanksgiving and I’m going through serious carb withdrawals.

Cheers to your amazing dad!