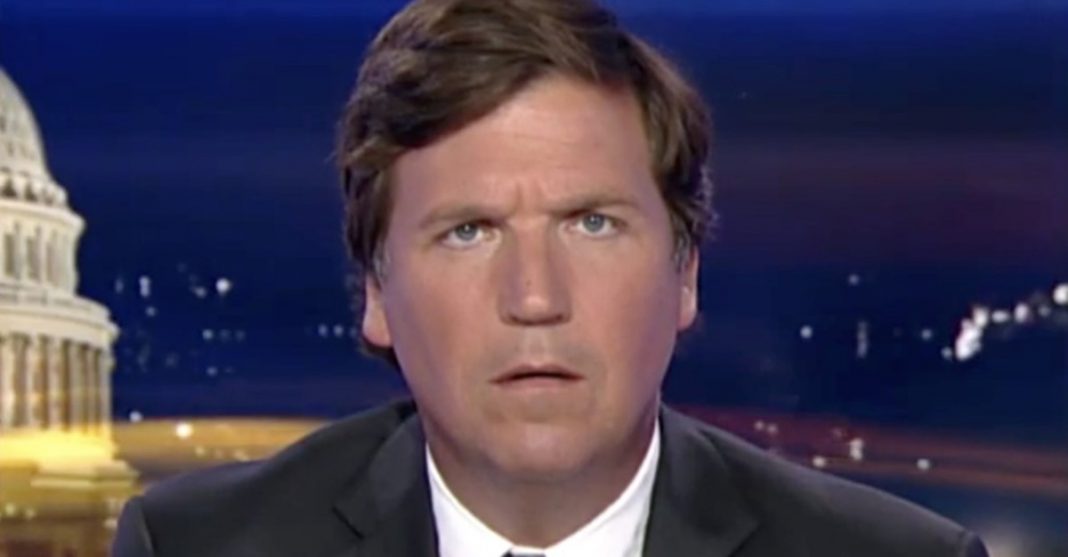 Relax, Tucker: Don’t do it! When you want to talk racist shit.

Paranoid racist Tucker Carlson claimed yesterday that BLM mobs: “Are coming for you!” The rallying cry, throughout history, of Fascist demagoguery.

Poor little Tucker! The awful purple people are “coming for him!” How terrible. (Excuse me, of course, I meant the “green” people. No. No. It’s cyan and magenta people. No, obviously I meant pink people that are slightly grayish. Okay, let’s settle this: anyone who isn’t Caucasian.)

At any rate, the racist freak “knows” that someone that he hates, and wants you to hate, and be afraid of, is going to get you (Watch out Tucker, it’s the men in the white suits that are coming for You!)

And Fox News supports paranoia, and hate speech, and the murder of minorities in the name of God and law. (Fox News is a sick parody.) And apparently, the murder of anyone who stands up for their civil and human rights. Isn’t that what, “they are coming for you,” means? That you must, to survive, defend yourself?

This paranoid rabble-rouser and dimwit have already done more to divide Americans than any hate-filled, filthy, denier on FOX’s hotbed of virulent racism and mindless denial of decency and civility. Now he advocates more hate, with more bizarre and unreal fantasies to support it.

Let’s get back to the gist of this xenophobic rant. An unspecified group, maybe led by “Auntie Fay,” but at any rate, a “mob,” are going to kidnap you, make you an ideological slave, and ultimately kill you.

Of course, there isn’t the slightest shred of proof to support any of this except that black people are still black. To a fear-mongering, color-struck fool like Carlson, and the Fascist, traitorous party who watch him, it’s enough to be black, or against his philosophy of murderous, anti-American persecution.

But, I think that I stated this all wrong. What I should have said is this:
Carson may be a Fascist pig, and an idiot, but he does NOT believe the despicable filth that he spews; he just wants the army of armed fascists to read the coded message: “Kill!” Then lie and justify mass murder by boohooing that you were afraid, intimidated, and forced, out of fear, to defend yourself. He’s, quite simply, justifying murder before the fact. And, by the way: you can be hanged for that!

Fox News is doing everything in their considerable power to divide the American People to the point of civil war so that they can achieve their: “final solution,” of murdering Liberalism, ending free speech and peaceful assembly, and limited the franchise to “God-fearing whites.” You know – racist fascism.

You get the impression that freaks like Carlson sit up all night trying to dream up the most ridiculous and bizarre thing to say that they can think of. SUCH A NOBLE GOAL! But, it really isn’t that simple. He is a leader of a treasonous, genocidal, subversive and criminal group (the Republican Party) that has planned for years to overthrow democracy and the government of the United States. To kill as many fellow citizens as they possibly can, and destroy intellectualism. Again: SUCH A NOBLE GOAL!

Fox News is a racist, bigoted hate group, whose Board are fear-mongering liars. If they can advocate racist hate-mongering; then I have the right to call them out and get right in their faces and say: “You racist filth. You Fascist bastards. You filthy disgusting animals. You primitive troglodytes. Damn you!