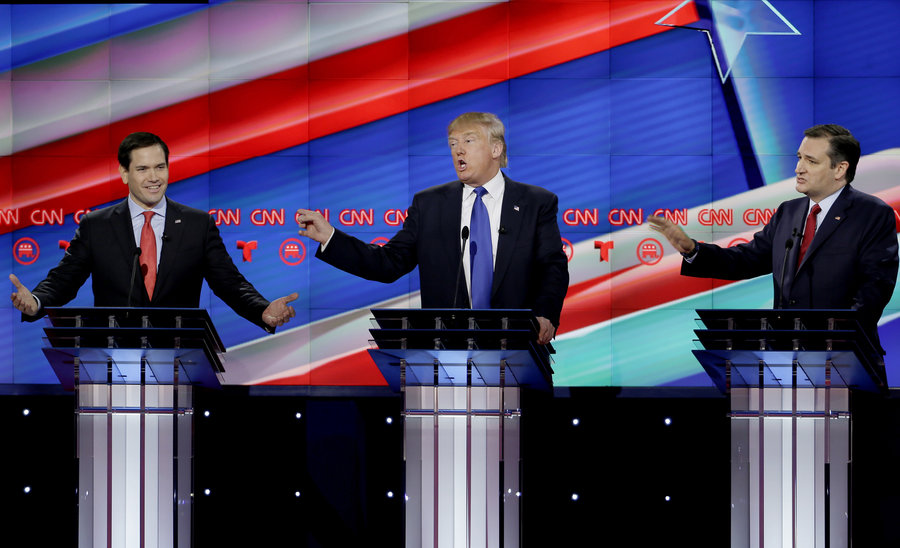 Though Mitt Romney may not be appearing on the stage…yet…tonight is the 3rd to last scheduled debate for the GOP and with times as desperate as they are for the GOP establishment along with Ted Cruz and Marco Rubio to stop Trump on his march to the nomination (sorry Kasich, you don’t have a prayer), there should be some fireworks tonight.

Coming on the heels of Mitt Romney’s unintentionally ironic attack today on Trump for displaying many of the same negative traits that Romney did in 2012, the knives will be out for Trump at the debate tonight from all directions.

You’re invited to join us right here for a live chat during the debate, the best way on The Planet to watch a debate! You can join in on the conversation or read along by clicking on the “Live Events” floating bar in the bottom right hand corner of your screen (if you only see a small button there, click on it to sign in then click the “Live Events” bar.

Also, you can live stream the debate which is being hosted by Fox News through this link: http://video.foxnews.com/v/4784624471001/detroits-historic-fox-theatre-hosts-fox-news-gop-debate/?#sp=watch-live

Ad – I just wanted to thank you for hosting the LiveChat tonight. It was great fun.

About the link to Scott Adam’s blog I posted during the LiveChat. I was just over there and saw his posting of a (seeming) pro-Trump letter. I read through it a couple of times looking for the snark or at least The Twist but it isn’t jumping out at me. At this point, I’m pretty sure it’s real, and it is the first overt Trump support I have seen at the Dilbert site.

The point I want to make is that since I’ve been away from here for quite a while (longer than I want to think!), I don’t want anybody to think I’ve shown up to promote Trump in any way! That there would be a President Trump is anathema to me!

Having followed the Adams blog since around last Christmas, I _think_ he posted the letter to show how deep possible Trump support runs in many well-spoken and even highly educated people. If so, the Trump phenomenon is even more frightening to me.

Anyway, I had to come back over and say HI again and to try to head-off any misunderstanding. It’s still the same ‘me’ from the old days, and I haven’t turned into a nasty troll (well, not YET anyway!).

I’m following the election closely, and have my passport (and shots!) up to date and ‘essentials’ packed just in case it’s Bug Out time after November.

On a lighter note, we had a great turnout for Super Tuesday and lots of great support for both Bernie and Hillary (I’m feeling the Bern myself, was happy to volunteer as a delegate to Convention for him – I just hope the Hillary folks share my interest in fine beers so we have an excuse to get together! 😉 )

Thanks again for 2nite! ~RF

Hey RF, no worries, I didn’t get that impression, sounded like you weren’t sure if he was being ironic about his Trump support…apparently not.

Yep, was a great turnout and conversation last night, only way to keep my sanity watching lunatics “debate” is thanks to the live chat. Last night’s debate was “hands down” the most immature, obnoxious, moronic debate I have ever witnessed. I am genuinely embarrassed by how the rest of the world views our nation today. That we could have a leading candidate for President who talks about his penis size, brags about lying being “flexibility”, calls everyone else names, vows to order our military to commit war crimes…you couldn’t have made this stuff up without being told it was too ridiculous to happen.

At least Trump has no realistic chance to become President, having insulted and repulsed the majority of voters. We can only hope the GOP explodes big time this year and loses its grip on power until it regains its sanity.

Yeah, it’s easier to watch that kind of stuff with other GOOD people around – like going to a scarey movie alone vs. with the other kids!

It was indeed appalling, to think that any of the people on that stage are the only serious candidates from a major national party. What ever happened to “Best and Brightest”, or at least people who maintained the illusion of such? It’s been kabuki theater for a long time, but at least in the ‘old days’ the candidates ACTED like they were adults even if they weren’t.

Donald, to his credit, was only ‘exposing’ the size question that Mario (err…’Marco’) had been implying – all the same, it was incredibly juvenile all around and has NO place in a political race whatsoever.

Fox wanted a slasher film, they tried their best to bring out the gore, but in the end the Trumpistas only saw ‘their guy’ being picked on by the establishment (ie – everybody else). Donald has re-written the rules and nobody in the RNC seems to notice, or if they notice they are unable to adapt.

It’s like everybody is playing hopscotch and Donald has shown up to play Machete Roller-Hockey. He even has a goalie mask on!

If Donald runs and wins, look at his VP choice to be our President after some kind of massive ‘accident’ is how I’m reading this one. The Smoking Dude from X-Files is burning through cartons of unfiltereds deep in a basement bunker somewhere setting plans in motion…

Thanks again, I hope to return soon! ~ RF

Those who support Clinton and those who support Sanders have to understand that the Party will have to come together.
You can, of course decide to follow the GOP and create antagonistic factions.
it is very unlikely that the Democratic Party will get a majority in the HoR. The Senate is in play; but, the House, more likely than not, is not in play. That means that domestic reform is very unlikely.

Democrats need to watch this meltdown and learn not to do the same thing themselves.

I love the fact that the Repubs have woken up too late to prevent Trump from getting the nomination but just in time to prevent him from winning the White House.

Hi Ad! I’m making an extra large batch of popcorn and eagerly awaiting the start of the Detroit Cage Match!