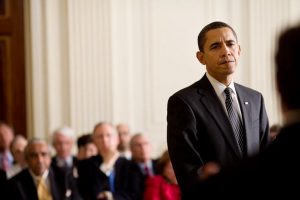 Today President Obama held his promised healthcare summit with congressional leaders. Here is how the various media outlets portrayed the day’s events. Some outlets had many stories on the summit; others only one.

For anyone who has been following this Rashomon series and who monitors the headlines at Huffington Post, you will notice that HP has made a startling about-face recently. The site is inexplicably back to supporting the president for the most part. I’d love to know why and how long this will last. At the same time, Drudge seems to be stepping up its rhetoric in the headlines.

Drudge
=======
Now What?
News channels quickly lost interest in summit
‘I don’t count my time because I’m the President’ — Obama on why Dems had double the speaking time
TIMES OF LONDON: Obama bores America into submission
RAHM-IT THROUGH STARTS MONDAY — DEMS DECIDE TO PUSH ‘THE BIG BILL’
Pelosi: Health Reform Will Create 400,000 Jobs ‘Almost Immediately’…
CNN Poll: Only 25% want Dems to pass their health bills….
McCain invokes 2008 campaign promise at summit…
President scolds Rep. Cantor for bills on desk…
Biden: ‘It’s easy being vice president — you don’t have to do anything’…

The London Times is owned by Rupert Murdoch, no surprise in the lie of the headline there.

I watched the whole summit on C-Span and the only boring part were the Repubs who tried to dominate the “speak” but were very unsuccessful when your President swatted their talking points like an errant fly on his shoulder. Makes me wonder if we all watched the same summit or if the Murdoch lackeys were watching through their opened/closed fingers as Obama flattened and squashed their pointless and mindless drivel.

What I came away with in those almost 8 hours of being lulled to sleep by the GOP members, is that not one of them has actually read the whole bill, if they had they could have stopped wasting everyone’s time with their suggestions which were already contained in the the bill and would have had more time to spout their remaining nonsense without complaining that their allotted time was less than the Dems there. How pathetic all round for the party of NO.

This is a great collection, e’cat. My favorite headline is from the Times.

HP may be getting less hostile, but its headlines are still woefully silly. “Health care summit goes 7.5 hours” Really? That’s what they got out of the meeting?

Thanks. I love this feature.

Really like legislators have anything better to do, especially Repubs who have nothing to do.

The spin was amazing though. The summit was never to do anything. The summit was a forum to express each parties ideas. That’s why the Dems spent so much longer because Repubs have no ideas.

Of course that would have been my Rashomon headline.

e’cat, you always do a great job on these and I always appreciate them.
(hardball is starting off with the O/McGrumpy flap. Like that is the main story)

(For some reason, I’m seeing an Edit button on other people’s comments!)

Escribacat, I think I’ve fixed that, is the edit button gone now?

Okay, how about now?

BTW, does anyone else see an “Edit” link in the upper right corner of each comment? Really appreciate your assistance on this!

I never noticed the one in the upper right corner! I see one there and still see one above the Reply button.

I for one am pleased at HuffPo turning around from the constant bashing of Obama. I have a feeling that they have been receiving a lot of complaints and being that they seem most swayed by what produces the most traffic, I wonder if traffic has been dropping off there?

In any case, whether it’s sincere or not, I welcome it.

I agree — I’ve been going there more lately because the environment isn’t nearly as toxic as it was a month or two ago.

This youtube shows a guy giving a marketing presentation (or something). He is showing how Huffington Post is clobbering Drudge in traffic. Dated May 22, 2009, the statistics he uses are interesting:

However, the unlabelled graphs on cubestat show increases (in something — can’t tell what).

E’cat that is a fascinating site. I roamed around there and can’t figure much out, but I wish someone who understands that data better would tell us what it means. Also, I noticed that HP blocked the daily visitors info. We can only see weekly, and if I am reading it right, there are huge spikes every week.

I know. I can’t figure out what those graphs are supposed to show!

As mentioned above, I wouldn’t put any weight into info at any of these sites. It’s very iffy for any outside entity to know with certainty how many visits a site has had unless a site provides them access to their server data.

And notice how they say, “Estimated Numbers”?

I’ve browsed these places, some are in the ballpark on The Planet, others like Alexa are way off.

They each use their own formulas and processes to estimate, some work better than others but only your own server or a service you link up with is definitive.

I’m going to do a page capture — just for the memories.

I shoulda bought into your website when it was at $50 million!!!

LOL. What have you got going there, Nellie?

I’d better not let the IRS get wind of this!

But just think of the loans you could get using your website as collateral!

Yep, as Nellie says, these sites that purport to reflect the visits and worth of sites are ridiculous and their stats are meaningless.

Despite their self-proclaimed worth of $100 million, their site’s value is highly questionable. I will find this article I posted previously but I believe it asserted that HuffPo only brought in around $300k in 2008 and that’s gross.

That would not justify a worth of even $25 million. They hornswaggled hedge funds into investing misrepresenting the site’s value and the HFs are probably riding them hard to produce revenues.

We must now break Huffington Post into smaller parts. It’s become “too big to fail”.

As long as we don’t have to bail it out.

I noticed it, too. I think two things may be happening in addition to what you mentioned. HP is being cited more and referenced more in reputable sources like the Post and the Times, and MSNBC. It can’t continue to be a tabloid if it wants to keep the cache that comes with that kind of exposure.

Second, there have been a number of articles around the web on reputable sites dissing HP for inaccuracies, bias, and silliness.

Those two things together are probably driving the change as much as the complaints and any drop in traffic.

The funny part is that most of the posters don’t seem to notice though. Huffy created a monster and getting it back in the bottle is got gonna happen. They probably lost so clicks and giggles which affects the bottom line, ad money. It’s hardly benevolence on their part. I’m waiting for another leaderless theme even when Obama is leading.