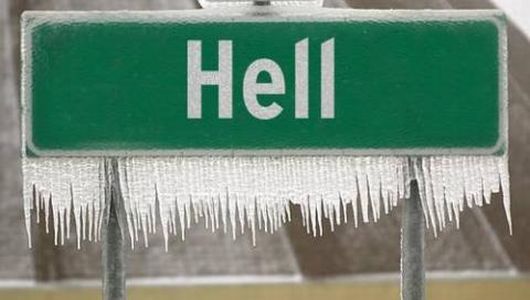 I came across this story and considering Rahm Emanuel’s history with his support of Israel his criticism of Israel is certainly a hell freezes over moment for me.

In a recent meeting with Yaki Dayan, Israel’s Consul in Los Angeles, White House Chief of Staff Rahm Emanuel reportedly expressed his frustration with the situation, saying the U.S. is “fed up” with the Israelis who “adopt the right ideas too late“:

Emanuel’s complaint was made with regard to Prime Minister Binyamin Netanyahu’s “belated recognition” of the principle of “two states for two peoples,” as well as the Jewish construction freeze in the communities of Judea and Samaria, which was only announced “many months” after the United States asked, or instructed, Israel to carry it out.

Emanuel also lashed out at the Palestinians, who he said “never miss an opportunity to miss an opportunity” for peace. According to Dayan, Emanuel said “if there is no progress in the diplomatic process, we will reduce our involvement and effort in the conflict, because we have other matters to deal with.”

Of course his comments about the Palestinians are par for the course.

we will reduce our involvement and effort in the conflict, because we have other matters to deal with.

I agree that’s his AIPAC side speaking.

KQ, this is an area in which I’m woefully in need of education. Is Rahm Emanuel trying to say that unless things move in a more constructive direction, the U.S. is going to drastically reduce its involvement, in a sort of “pox on both your houses” reaction?

It’s only my opinion but I think he means Netanyahu

Here is Peace Now’s position (and mine) on the settlement in East Jerusalem:

It was announced this morning, that the Jerusalem municipality planning committee has decided to approve the establishment of a new Jewish settlement near the Mount of Olives. This neighborhood named “Beit Orot” encompases a plan to build four residential buildings so to inhabit 24 Jewish families

After the settlements Ma’ale Zeitim, City of David, Sheikh Jarrah and construction at Sheppard Hotel, this new settlement named

Continuing the settlements in the Palestinian areas is not only illegal but a stick in the eye of the peace process. It’s pure right wing Israeli politics to show “strength”.

The continued building over there is obviously meant to be provocative. Are they trying to force the issue? They are part of the problem, not the solution.