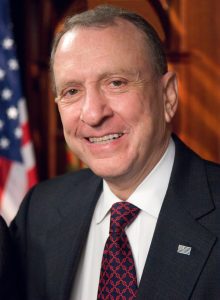 During his appearance yesterday on Fox News Sunday, Sen. Arlen Specter (D-PA) appeared to give out some inside dirt from his days as a Republican — alleging that the GOP plotted early to stop any bipartisan cooperation with President Obama, and to instead look towards the 2012 election.

“Sen. DeMint is the author of the famous statement that this is going to be President Obama’s ‘Waterloo,’ that this ought to be used to break the president,” said Specter, referring to the political battle over health care. “So that before the ink was dry on the oath of office — and I know this, because I was in the caucus — the Republicans were already plotting ways to beat President Obama in 2012.”

Read the rest of the article here.

Looks like the GOP have their own LIEberman, and it’s about time Orrin comes clean –

And WHO is is this person to announce it, you think he’s ok?

Then I read a story that makes makes me awfully sad.

Funny, I was going to write something about it, didn’t happen. Thinking about world hunger, I decided to try it, no food for a week, it was awful.

Yes I did but I drank a lot of water that these people don’t have, I’m lucky.

For me friends and love is more important than food, silly I know.

We had $6000 stolen from our hallway, how unsafe can you be?

They stole money, my cash card, my bank book, had to stop everything. Next year will be better I’m sure.

Oh my goodness! I am so sorry. What an awful thing to happen — just terrible.

The not eating thing. Although, I understand why you did it, weren’t you concerned about health issues? Did you consult your doctor?

How are your kitties? My three are behaving very strangely — I think it’s because there’s a full moon this week.

Thank you, don’t worry, we are fine and like the full moon will rise again.

Wow, so sorry to hear that, Kalima!
A terrible way to end a year.
May the Year of the Tiger have blessings in store for you, and soon!

I’m very sorry to read this, Kalima, and that you must endure the stress from such a violation.
I hope you are okay.

Heard from our friend and he’s not feeling well.
I am praying for him and you.

Good morning, K! I am so sorry to hear of your misfortune! Nothing makes me angrier than a thief! And $6,000? That’s quite a hit! Here’s hoping the police can recover it, but I imagine the chances are slim! The most important thing is that you are OK!

Kalima, Sorry to hear that! Now I understand your other post about the $6000. And let me join the chorus of voices telling you to be careful with that fasting!!

Kalima! How awful about the theft! That’s massive, and I am so sorry!

May I add in about your fast – for various reasons, my late mother went largely unfed for about a week due to her own illness and my father’s physical incapacity. It took a week to have them tell me they needed my help. As a result she suffered massive kidney problems directly related to that. Cesar Chavez died of kidney failure due to his many fasts. So – be very careful!

Well said wts, for me China needs to be held responsible for it’s actions, this afraid business bothers me, it should bother everyone.

Scher — I’m going to edit this post to limit the text that we’re copying from TPM. Even though the text is in blockquotes, I think we should only run a couple of paragraphs to avoid copyright issues.