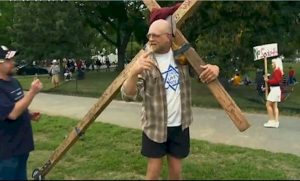 Yes America, it’s true.  The media is giving power to the most ignorant segment of our country. Of course, the first clue that these people were not the brightest bulbs in the chandelier is when they decided to call themselves “Teabaggers.” While they may be a great source of entertainment for those of us who have more than two brain cells to bump together, the topic of health care is an important one. These people are grossly uninformed, misinformed, and  generally motivated by their fear of the unknown. Never once do they consider that perhaps they know so little because they are so overwhelmingly brainless. Oh, and that they refuse to get their news from anywhere other than right-wing propagandists and Fox News – who are bought and paid for by the same corporations that have brought us to the brink of disaster.

They believe that czars are bad, generally because it is an unfamiliar word in their vocabulary. When informed that Reagan also used czars, and that czars were expanded under George W. Bush, the crowd expressed dumbfounded confusion and disbelief. Their level of skepticism increased further as they were educated on the roles of the czars here in America. That they wield no executive power and act as advisers.  Not to mention that most of them have been confirmed! Dubiously, one man questioned, “and you know this how?” If Glenn Beck didn’t say it, it must not be true. One woman worried about whether or not they are given land to lord over (like those czars that Caesar had back in “Roman Times.” )

Another deep thinker also contributed to the discussion about czars, stating that, “in Russia, czars are kings. I want people to know that in America, Jesus is king.'” I wish that the guy interviewing her would have said, “many people believe that Jesus was a socialist.” But, he may not have gotten out of there alive.

A man goes on and on about abortions and how black women make up a high percentage of said abortions. But this has nothing to do with race.

A man wielding a wooden cross, typically used for cross burnings by the KKK, states that he had no clue that the rally was going on. He goes on to ask the people around him if they wanted to sign the cross, which already had several signatures. But, this has nothing to do with race.

More mention of President Obama being a Muslim, and not a Christian as he states. But, this has nothing to do with race.

A man holds up a tall sign that proudly states, “Joe Wilson for President.” He changed his mind after he was informed that Joe Wilson actually voted to pay the hospital bills of illegal immigrants that visited the Emergency Room – with taxpayers money.

A man states that there are simply not enough doctors in America for everyone to receive health care. That we would be 200,000 doctors short!  When asked what should be done for the millions of Americans who lack coverage, he didn’t have a solution. Especially when there is no solution that would conjure up more doctors. In other words, those without health care, feel free to rot.

A woman states her belief that President Obama is interested in building an army of 2 million people who will be as well armed as the military. She goes on the repeat the false claim, even as she is corrected. I guess she also believes in FEMA Death Camps.

A man states that Hitler wooed all with his fancy words, just like President Obama. Does this mean that all educated men with charisma should be out of the question for the presidency in the future?

A woman whose been in the health care industry 20 years claims that the, “Bury Obamacare with Kennedy” signs are simply “sarcastic.” While another individual  goes on to state that the sign was okay, because the Kennedy’s had “done other stuff too,” though he could not think of any of that stuff “off the bat.”

And finally, ignoramuses attending the rally believe that being a communist, fascist, and socialist are all the same thing. Practically interchangeable. Not only that, when questioned, they have no grasps of what they are even protesting.

There are other blatant examples of the overall ignorance of the crowd. All brought together by the hard work of Glenn Beck and Faux News.

These are the people keeping us from having a REAL health care debate. And their “representatives” are allowing it to happen!

At the end of the video, a woman is in a tizzy about how she is frustrated that they aren’t being listened to by the government, as a whole…

God help us if they ever are.

Thank you KQuark for motivating this entry. After viewing the video that you posted in comments, I had to write this or my brain was going to explode all over my keyboard & computer monitor.

I just can’t watch this kind of thing on video. I’ve seen too much of it face to face. I may be overly sensitive, but I find this behavior very frightening.

I also have to say major Kudos to the kid doing the interviews. That took allot of bravery and patients to deal with those people. You could see several times he could not believe what he was hearing from those people.

I know how you feel. Too late tonight for this tired brain but I have an idea for an article to write about how the root of all this hatred is such a poorly kept secret but the MSM refuses to focus on it even though so many of us and them know what this is really about.

Why are they tamping down the racial issue that is so obviously the key component here?

Maybe Pres. Carter’s statement will force them to confront this more honestly. If financial concerns are the cause, what could be a bigger, more explosive story than to accept that maybe 10% – 20% of this country are just plain hateful racists (maybe more?)?

Excellent post. Thanks for running down the hatred, lies, hypocrisy and utter nonsense of these fools. There are all the sheeple of their favorite right wing pundits like Beck and Limbaugh who have no brains of their own.

The worst part is these teabaggers actually have physical representation in congress with people like Joe Wilson. But kudos to former President Carter who has to be the best former President in history. If we had listen to him instead of let Reagan blow smoke up our buts this country would be much better off today.