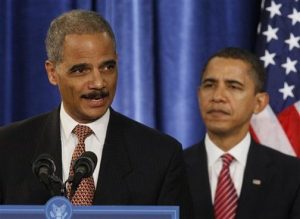 Holder’s trial balloon describes a course of inquiry worse than no investigation at all.

While what little we know we know due to carefully leaked comments, the fact that the leaks were coordinated to several newspapers simultaneously and that the story was consistent indicates that this is a course of inquiry that Holder is considering:

To investigate only if some interrogators went past the barbarous limits offered by Yoo and Co from the Office of Legal Counsel.   There currently is no indication that there would be any discussion of the formulation of the torture memos by Yoo and his fellow deviates, nor any discussion of the fact that Cheney decided what sort of torture he wanted to conduct, and then directed the lackeys at Office of Legal Counsel to write memos to permit said torture.

Obama wants desperately to have no investigations.   The absolute last thing his presidency could tolerate would be the raging victimization of the Reactionaries should a serious effort be made to determine who actually ordered that hundreds of prisoners be tortured, with perhaps a hundered tortured to death.

His is a rational concern.   I have colleagues on this very blog who are certain that such investigations would derail any opportunity to pass health care reform.   I believe they may well be correct, Obama and those begging their nation to finally pull its collective thumb out of its collective ass and get heath care reform enacted.    Why is America determined to be last and worst in Heath Care among industrialized nations?

But the necessity of bringing  justice in this case is absolute.    Cheney is a hold-over from Nixon, and he was furious that the absolute power of Rethug presidents could be thwarted.   Cheney was delighted to steal two presidential elections, and commit tens or hundreds of thousands of felonies while in office.   Our civil democracy cannot tolerate another such assualt on our liberties.  BushCo must be tried.

Oh, and just to give you a taste of the mendacious horseshit that flies around at a moment like this, on this morning’s Beltway Bullshit Confab, ABC style, George Will spoke darkly about the risks to security if an Independent Counsel were to be appointed to investigate TortureGate.

What low grade drivel.    The Independent Counsel law expired ten years ago.    Holder could appoint a Special Prosecutor, al la Fitzgerald.   Said prosecutor would not be allowed to discuss any part of the case that did not involve bringing charges.    Much as Fitzgerald has never discussed the “testimony” of Rove, Cheney or his sock puppet W.

No, if this is a serious offer on the part of Holder, then this is the consensus least the Admin can do, with Emmanuel and Obama signing off.    None of this came as a surprise in the WH.

Thanks FlyingLotus! So nice to see you here! Hope you’re doing well! Kick off your shoes, have a refreshing beverage and write an opinion piece here on any topic you’d like!

Make yourself “to home”!

I knew I could count on you.

Actually, The Church Commission accomplished a fair bit. But Cheney knew that it could all be reversed with time and will.

That was for Quark.

Fine no investigation at all then. They were never going to lead anywhere. What investigation of government investigating top levels of government ever has been successful? The very best result we ever get is catching people in lies or obstructing justice. From Watergate, through Iran Contra and Whitewater all the way to the Plame case government has proven it cannot investigate itself for one clear reason. You can never take politics out of the equation.

Time to get universal healthcare passed anyway. It took months to get progressives to fight for real healthcare instead of obsessing about Bush anyway.

Not having a real healthcare system in this country contributes to the deaths of 20,000 Americans a year.

Now conservatives whether Republican or Democrat in name are doing what they can to obstruct any real progress.