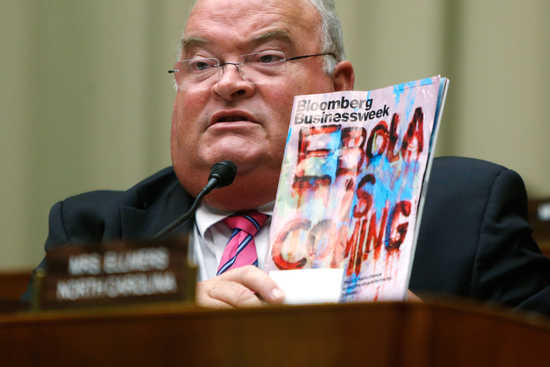 With Ebola , climate change, or any other issue the GOP keeps denying what science is telling us.

Ebola is a terrible thing, but one person has died in America from it. He came from Liberia and was turned away from the emergency room only to return with Ebola. This was in Texas. One of the nurses who got Ebola from Mr. Duncan is now free of Ebola. His girlfriend and the other people who lived with him in their apartment are not infected. Science tells us that it is not transferred that easily.

My point is that the GOP is fear mongering! Safe to say more Americans have died from the flu in the past two weeks than from Ebola. Why are they not fear mongering about the flu? The flu kills many Americans each year.

How fair is it to put people who are healthy and returning from helping Ebola patients in Africa in quarantine? Why treat these people like criminals? Science tells us the returning people can just be monitored and when and if they have a higher temperature, that is the time for quarantine in the hospital.

The GOP denies science. Climate change is happening. Ebola is dangerous but nurses and doctors are not bringing it here if they don’t have it!

So am I right or not? Lets talk about this.

Fear mongering in the 21st century! Who’d have thought that in the age of Martian rovers there would still be so many stupid people in the so-called greatest nation on the planet. With a national voice yet. It’s a real embarrassment is what it is.

JJ, America is made up of many kinds of people. There are people who care what happens to others and the environment. Then, those who try to make money off the poorly educated. Then of course those ignorant who don’t believe in science.
The folks trying to make money off the group of ignorant may be the worst. I blame the religious extremists of all religions.

Sorry, I kinda got off the topic a little.

PUBLIC SERVICE ANNOUNCEMENT! This is a WARNING to all of my Republican friends! ALL of the polling precincts and ballots across our great land of freedom and democracy have been infected with EBOLA by Obama. The only way to avoid contamination and death is to stay at home and away from those places and documents for 21 days until the danger has passed or you may die! Please pass this warning on to everyone you can!

Hey Harleigh, how are you?
Your PUBLIC SERVICE ANNOUNCEMENT is a wonderful way to keep the republicans safe from Ebola. We sure don’t want them to get sicker than they already are, do we?

It’s a tough job saving baggers and squishing trolls but that’s what we do Nirek.

Harleigh, maybe we can have Muslim Americans staffing polling places, that should scare off Repubs just as much.

It will be UN poll watchers looking for all the ACORN voter fraud and recruiting FEMA reeducation camp ‘volunteers’.

I can’t say I know the real reason they are not fear mongering about the flu, but I have my suspicions. Could it be that Big Pharma has a way to market their wares for the flu but have not yet figured out how to make or administer a vaccine for Ebola? How do you get millions of Americans and billions of people worldwide to buy your product, when you put it on the market, if you don’t first scare them into believing that without your product their lives are definitely in danger? Once capitalism, the GOP and corporations figure this out, the fear mongering over Ebola will probably subside, even if the disease kills more people than it is killing today…the deaths brought on by these diseases help sell a product and in a capitalistic state, profit, not human life is the bottom line.

You are probably right about the BIG PHARMA thing. It still comes down to greed on the part of too BIG corporations.

Dad, the GOP has to fear-monger because they don’t actually have a platform to stand on. They are anti-science, women, poor, middle class, livable wage, – they have nothing but fear to go on. It’s baffling how they can get any votes at all.

Thanks for the response, NJ. You’re correct as usual.

The second nurse who got Ebola while treating Mr. Duncan is now Ebola free!

Proof that with proper care and attention this disease is not as scary as some would have us believe. As a matter of fact, in its present form it is less dangerous than many of the Flu viruses we are experiencing in the world today. I’m always happy when I hear good news, and this is GREAT news so I couldn’t be happier!!!

Nirek,I must say I am really confused about the fear of transmission of the Ebola virus.
Mr. Duncan’s fiance’ looked after him when he was contagious, for several days, and she, as well as the three boys living in that apartment did not come down with it…It is interesting to note that she said she cleaned everything with bleach! And yet, the nurses who were looking after him got sick, even tho they had protection. It seems he was highly contagious when in hospital. When at home and during visit to the hospital he was not as contagious. So there appears to be a time frame when, even tho one is exhibiting symptoms, one will not infect others.

Does this fact not show everyone just how difficult it is to get ebola?
Why do people not use common sense? Ah…right…politics.

Goleafsgo, good point. Supposedly he took care of his own messes there, too.
It is interesting that she and the boys never came down with Ebola even tho they were left in that apartment for a few days.

Science says that people are not in jeopardy until the person is sick. So why quarantine them until they get sick?