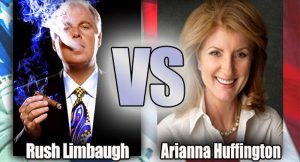 Regarding Hairyanna’s turn against Obama, and by Dog she was four-square in his corner right up to Nov 10 (HRC could not catch a break at Huff, you will recall), I am reminded of some comments I made about Plush.

During the General I occasionally commented that I was so looking forward to Obama’s victory, and hoped to learn on the day after the election, that he had stroked out on the toilet, as did Elvis.   I was corrected by insightful correspondents who wrote that the best news in the world for Plush would be Obama’s victory.   Being in oppostion is what makes him “relavent” (sorry, I could not find a more acceptavle word there!)

And true that is.    Plush is practically the Chairman of the RNC.

Currently, a common meme among the trolls is the ratings strength of Faux.    As if that was not utterly predictable.    The circulation of The Nation was way up during BushCo, while that of The New Republic thrived in the Clinton years.

To be the opposition media is good business.    When your party gets into power, you lay off staff and add to your circulation dept.

Which brings us to Hairyanna.  Many of us are grey-haired.    Who among us can remember a more opportunist schemer than Hairyanna?   Huff is trending to oppostion to Obama because that is where the money is.    The corporations and lobbying groups prepared to pay to advertise on a political blog are those in oppostion.   Those in support are broke.   And Hairyanna benefits from the fact that there are puritans and trolls.   The puritans demand NO COMPROMISE!   SINGLE PAYER, NATIONALIZE THE BANKS NOW!   While the trolls gloat over the slightest mistep.   Hairyanna gets to attack from both flanks and pretend to be important.

The last two sentences are the crux of the problem on HP. They are just about building opposition and not about supporting anything. Look at the other progressive websites like DailyKOS that are real progressive advocacy sites. They have no time criticizing Democrats when appropriate but they don’t engage in the same kind of constant cage rattling that Huffy does.

You are spot on.

Have you seen the latest of Arianna’s BS stories??

Divide and conquer is clearly her goal. And she shuts down opposition.
Almost all of my comments on that thread are gone. It cost me 3 fans because I called out Dems, and I can’t get a comment on.

Nicole, check out my latest article, just addressed it and the bigger ramification…

…The Huffington Post has become Fox News for Progressives.

Aryanna actually uses puritan’s (to borrow K7’s word) non compromising style against the white house. In every government there is a political arm and a policy arm. Of course the political strategist know that passing a public option is a heavy lift and risky, but that has nothing to do with the policy arm supporting the public option. Of course the president needs to wear both hats. Huffy opportunistically uses the naivete of these purists against the white house for more clicks and giggles.

I spent the whole morning enraged, Kquark. I positively am growing to despise that walking witch. grrr………